Lots of activity last weekend; if you didn’t compete then you missed out!

On Saturday there was the latest round of the English junior fell champs and the Pennine Junior Inter clubs champs.  Report and pictures from Richard Marchant: 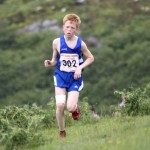 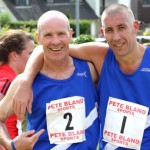 In the English junior fell champs Pendle AC are lying 8th in the club championship at present out of 50 clubs who have had runners competed in one of the three races so far, not bad.

Today five Pendle Ac runners, three juniors and two seniors traveled the short distance to Quernmore near Lancaster to run in the Darren Jones Clougha Pike Fell Race.  The conditions were ideal for running, the showers stayed well clear and the sun remained with us for the afternoon with a nice cool breeze.

In the seniors race we had Sean Crorken, who is now taking to fell running like a duck to water and Richard Marchant who both enjoyed this race which was 5 miles with 1250′ of ascent.

Yet again another good day out was had by all on the fells at this well organised event.

Also on Saturday Paul and Sarah competed at Buckden Pike fell race run in conjunction with Buckden Gala.  It stayed dry but was very windy on the tops with marshals in full waterproofs.

On Sunday Ruby Schofield was the only Club competitor at the latest Bofra fell champs race at Helm Hill near Kendal.  Running in the under 12s Ruby had a good race and is starting to become one of the regulars on the fell circuit.  The next step is to get Mom running in a Club vest.

The main event on Sunday was the young athlete league at Halifax.  No report (yet?) but we came 3rd in the match.  This was despite some excellent individual performances with Natrika setting a PB in the high jump.  Our overall place was let down by a low turnout.  If you are asked to compete and cannot please tell Christine in advance.