Anna on the Podium in Beijing

Pendle AC club member and coach Anna Anderson had a succesful trip to Beijing to compete in the World Aquathon championships and the world triathlon championships.  In the Aquathlon Anna came third in her age group, and in the sprint triathlon she came 4th, despite her chain coming off. 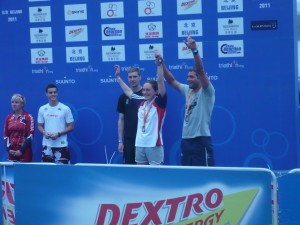 Anna started her swimming with Colne ASC and then joined Pendle AC where she was coached by Noel Finucane.  Now studying at Leeds Met, Anna is a member of the same elite triathlon squad as Alistair and Jonathan Brownlee, who triumphed in the mens triathlon.

Local company Hope Technologies have sponsored Anna by providing a tri bike, and this was shipped out to China for the race.  Tri obviously suits Anna who in the past has run for England on the fells and has swum the English Channel as part of a school relay team.

Anna has great potential as she masters the more technical aspects of bike riding which is new to her.

Here is a short report from Anna:

I’m just emailing to let you know how China went and I’ve attached a selection of photos.

I was 4th in my age group in the sprint triathlon and 11th overall out of 180 so really pleased with that. I really enjoyed the race although was definitely glad to have finished the bike safely as we had torrential rain from when I left to go to transition at 4.45am until well after the race had finished.

I also did the aquathlon which was totally different as the race was at 1.15pm in really hot and humid conditions. I was 7th overall out of 80 and 3rd in my age group, so definitely delighted at getting a medal. 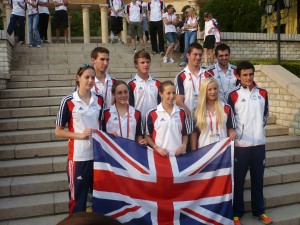 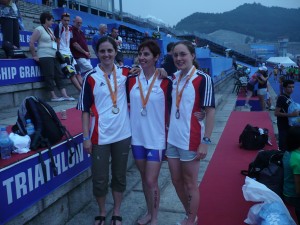