Last Saturday, 29th September, Leah Hillman, Spencer Phelan and Gregan Baker went to the Final Fling Meeting at Wrexham Athletic Club where each of them took part in a Throwathon Event consisting of Hammer Throw, Discus, Javelin and Shot.  They each had 6 throws in each event and with the warm up throws they would have thrown a minimum of 30 throws each – needless to say they were pretty tired by the end of the day ! 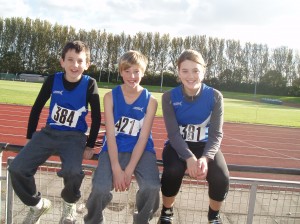 But, as usual, they did Pendle Athletic Club proud.  Leah, in the U15 Girls, got herself a PB in the Shot and Bronze Medals in the Shot, Javelin and Discus as well as getting a Silver Medal in the Throwathon Event.
Spencer did exceptionally well in the U13 Boys Events gaining PB’s in the Hammer, Shot and Discus and coming 4th in the U13 Boys Throwathon Event.
Gregan got himself PB’s in the Javelin and Discus and gained Silver Medals in the Hammer and Javelin with a Bronze Medal in the Shot.  He also got a Silver Medal in the Throwathon Event.
Gregan not only got a PB in the Javelin but again broke his own Pendle Club Record with a throw of 30.87 metres, quite an achievement to say he has been struggling all season with tennis elbow which now seems to have sorted itself.
It was an excellent day out in the sunshine at Wrexham and it was also nice to see the number one Great Britain thrower there from Windsor, Slough, Eton & Hounslow Athletic Club in the U13 Boys, Jude Compton-Stewart, he really showed us how to do it and was very friendly too.
On behalf of Leah, Spencer and Gregan, we would like to thank Derek for all his hard work with them this season which has seen great improvements in all three throwers.
Lynn Baker