Safari in the Snow (taken from the NACCC website)

‘On a wintery January day when the wiser residents of KnowsleySafari Park had elected to stay warm indoors the hardy Northern Cross Country fraternity took advantage of the opportunity to explore this wonderfulnorth westcross country location.
It had been a challenging couple of days leading up to the competition with difficult weather conditions making great demands on all involved in promoting this championship. However due to the resolve of both the staff at Knowsley Park and the hard working local volunteers the event went ahead successfully.’ 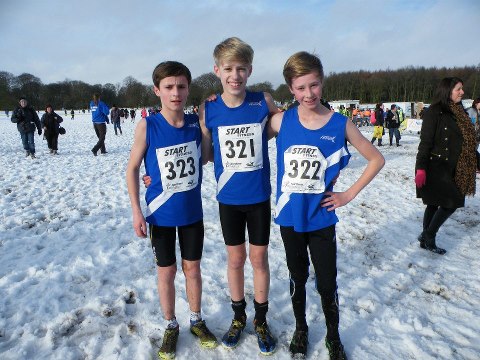 A hardy bunch of Pendle Athletes ventured forth in snowy conditions to Knowsley Safari Park to take part in the Northern Athletic Cross Country Championships.

All credit to each and everyone of them for taking part as the conditions were very snowy with soft mud underneath making every step a challenging one.

The weather was improving with sunshine making an appearance.  There were hundreds of people taking part which made for an exciting event.

Unfortunately Matthew Dutton, due to unforeseen circumstances, made the journey but missed his race, but thanks to Matthew an epic snowball fight was had with Gregan – still don’t know who came out the winner ! Thank you Matthew for keeping him entertained !

Kai had a fantastic result coming in 34th, brilliant running Kai in difficult conditions.  Next came Joe finishing in 74th place with Gregan coming in at 103 this was out of a field of 125 strong runners – well done all of you.

The U15 boys saw amazing performances from James Marchant 21st and Matthew Barnes 23rd who ran very strongly for the Club.  Also putting in a strong run was Thomas Marchant who finished in 87th – this was in a field of 147 runners.  Thomas has only had a few training sessions since recovering from a virus over Christmas so well done Thomas.  Also running for the U15’s were Jordan Isherwood and Tiarnan Crorken who put in great performances – well done to all for competing in the slippy unpredictable conditions.

The U15 Boys also came 9th team out of the 18 teams who got placed – brilliant!

Last but not least came Faye Holden for the senior ladies who improved her position by 15 places this year – well done Faye.

I must add that the team at Knowsley Safari Park did a stirling job at making the event go ahead.  After the heavy snowfall of the night before it was touch and go whether the Championships would actually take place.  After a course inspection at 7am it was decided to go ahead so all credit to the team who worked tirelessly to clear the car parks for the event – we thought everything ran very smoothly considering !