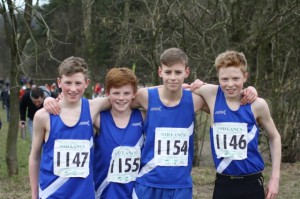 WOW ! – What a year for Pendle athletes. Well done to ALL runners this Cross Country season who represented our Club.

From the provisional results published yesterday, Pendle Athletes have finished the season on a high with some fantastic team and individual results.

Firstly – Well done to Ruby Schofield who finished in Bronze Medal position in the U11 Girls.

Thirdly – Well done to the U15 Boys who finished in Silver Medal position (38 points) just behind Preston Harriers (40points).

‘Well done Pendle AC U15 Boys Team for getting the Team

And finally – Well done to James Marchant who finished in Bronze Medal position in the U15 boys.

The final race of the season took place at the very picturesque location of Beacon Country Park, Skelmersdale. There was an excellent turnout of Pendle

Runners and an air of excitement and anticipation at what was needed to be achieved.

The runners were supported by Christine and Noel with parents and family once again cheering our athletes as they ran their races.

The weather was quite sunny with a cool breeze but excellent for running and the ground was still soft but not quite as muddy as in previous races.

Ruby Schofield and Ella Atkins started the day for the U11 girls with excellent running finishing in 6th place and 27th place respectively in a field of 37 runners – brilliant end to the season Ella.

Next up were the U13 boys who had a strong team of 7 runners. Kai Atkins, once again, had a brilliant run finishing in 9th place closely followed by Joe Lonsdale (12th) who has run well all season despite a slight injury in the middle of the season. Next was Gregan Baker (19th) who ran a great, confident race yesterday. Our next

little team of runners supported each other throughout with Jacob Van Geffen coming in 30th, Timothy Barnes (31st) and Harry Schofield (32nd) – a great race to the finish -well done to all three of you. and finally, but not least, came our little smiler Harvey Van Geffen (37th) – it didn’t matter that the sun didn’t shine all the time – it did while you were running ! – Excellent running all season Harvey !

Next came the U15 boys. Fantastic running as it has been throughout the season. James Marchant finished in a superb 2nd position ahead of some brilliant running from Matty Barnes who finished in 4th. Tiarnan Crorken had a brilliant run coming in 6th position with Thomas Marchant

finishing in an amazing 7th position.

‘A super run Thomas Marchant today at Skelmersdale, that 7th positon today has given you 9th position overall in the Mid Lancs U15 XC League this season. You have finally broken in to the magical top ten that has eluded you for so long. You really deserve that position through all the hard work you have put in this season’ (Richard Marchant)

Next up were the U17 boys who had a gruelling race with a killer of a hill to contend with to the finish. Fantastic running from Darius Boardman who finished in 7th position closely followed by Matthew Dutton who came in strongly in 10th. Brilliant consistent running throughout the season for Matthew – well done. Finally, Josh Ingham, in his debut year, came in 15th position with some great running (each race getting stronger and stronger).

Matthew and Josh finished the year in 9th and 14th in the Mid Lancs U17 Men – congratulations to the both of you.

And finally, our Ladies, Janet Barnes and Faye Holden. You have worked well together all year and have supported each other in your running.

Janet, in her debut year too, finished the race in 67th position with Faye closely behind in 74th. I wondered if the ‘killer hill’ would get the better of you but it didn’t – you both battled on for a great finish –

well done to the both of you for this race and all the others this season you have taken part in. Janet and Faye finished the season Ladies Vets (over 35) in a very respectable 48th and 50th position.

Just to mention, Adele Ogden (U15 Girls) although not running this race has had a great debut year finishing the season in 16th position – well done Adele – hope to see you again next year.

Well, as this Cross Country season draws to a close, we can reflect on what a great season it has been. As well as the above Mid Lancs achievements, Matthew Barnes won the Red Rose League U15 Boys and the U15 Boys team came first – so well done for that. I think also that the U13 boys finished in 3rd position in that league – so great result too.

We are a small Club compared to the bigger Clubs like Preston Harriers but we have some fantastic achievements from our athletes both in Cross Country and Track & Field.

Good luck to any Pendle runners who are running for

Lancs at the Intercounties next week – I know James Marchant is but not sure if any others.

I, for one, am looking forward to next year ALREADY !

Now for the Track and Field season – watch this space !!!