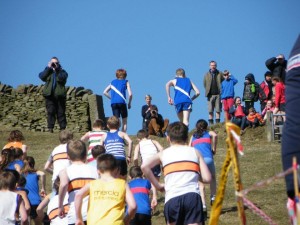 Spring finally arrived as  the sun turned  this Saturday into a glorious day for Pendle AC’s intrepid fell runners who ventured out on the fells to start their fell racing season on Pendle Hill.

It has been a challenging first few months to 2013 with difficult weather conditions, with this being the coldest Easter since weather records began, making great demands on all Pendle AC runners with their training. However some of our endurance runners managed to escape this cold spell for a week and attend a warm weather training camp in Portugal organised by their coach Noel Finucane.  As you will see from some of the results, this trip abroad certainly paid dividends.

An intrepid bunch of Pendle Athletes ventured forth out on to the fells of Pendle Hill at Barley Lancashire to take part in the 2013 Junior Pendle Fell race which also incorporated the 2013 Lancashire Fell Running Championships.

The weather conditions were favourable for fell running, with us being blessed with sunshine making an appearance all day.  There was however still a chill in the air to allow the runners not to overheat.  The conditions under foot were excellent providing fast conditions to run with just a couple of boggy areas where the snow had melted on the course, but our runners made short work of these areas.

The U12 Boys and Girls were first up for Pendle AC, in the form of Joe Alderman, Alex Baker and, making his debut on the fells, Harvey Van Geffen.  Joe had a good strong race coming 22nd boy in and we also think he was the 3rd Lancashire boy and should receive the Bronze medal, but for some reason at the awards he was mentioned to have run for Hyndburn, I think that one needs to be investigated.  Alex came in with a very strong finish as 23rd girl and just managed to stay ahead of Harvey Van Geffen who finish just behind as 36th boy.  Well done to all three of you.  There were 67 runners in your race and I hope you enjoyed your debut fell race Harvey.

Next away were the U14 boys and fresh back from their warm weather training in Portugal were Matthew Barnes and Thomas Marchant, also running was Jacob Van Geffen.  Like his brother Harvey, Jacob was making his debut on the fells today.  Matthew and Thomas showed they were full of confidence hitting the front of the race right from the start up until the 2nd climb up on to Pendle Hill, where Josh Boyle and the two Yorkshire lads James Lund and Thomas Nelson’s fell legs kicked in and moved just in front of our Pendle boys.  Matthew and Thomas did not give up and kept pushing those three all the way to the finish line with Matthew coming in 4th overall and the 2nd Lancashire runner getting the silver medal and Thomas finishing strongly just 4 seconds behind Matthew in 5th place and 3rd Lancashire runner in getting the bronze medal.  Then in a fantastic 14th position, and a big smile on his face, was Jacob J.  Well done to you three. Fantastic running in your first fell race of the season, onward and upwards.

Starting a minute after the U14s were the U16 Boys and Girls, and the lone Pendle Athlete in this race was our very own James Marchant, who having not run a fell race for nearly two years, was very apprehensive about his ability as to whether he still had his climbing legs.  But fresh from Noel’s training camp in Portugal he had nothing to be worried about.  He went out to the front with his great friends and rivals, Jack Hindle from Blackburn and Callum Davidson from Rossendale, and maintained a good strong pace all the way round.  Although Jack showed his superiority at hill climbing and went away from James and Callum, James managed to stay ahead of Callum and make a bit of distance from him to finish in 2nd place overall and 2nd Lancashire boy getting the Silver medal.

This year Lancashire are entering an U16 team for the Inter Counties Fell Running Championships at the Settle Hills race on 19th May.  We have fingers crossed that James gets selected to run for Lancashire in this competition and are just waiting for the selectors decision, so watch this space.

Last but no way least and running in the senior race was an awesome performance from the ever reliable Sean Crorken, who as you can guess has also recently come back from Noel’s Portugal warm weather training camp.  There must be something in the water (or is it the ‘Superbloc?!!!’) out there as Sean had a brilliant run coming 139th out of 340 runners in a time of 46 mins 48 seconds.  Well done Sean, tremendous run.

Last of all a big thank you to Clayton-le-moors, for their excellent organisation of the Pendle Fell race, this is truly a wonderful event and gave everybody, spectators and competitors alike a wonderful day.
Richard Marchant