A fuller report will follow when results are published.

Alan Plumb started the season in impressive form breaking his own senior hammer record by over two metres to reach 38.53.  Is this another season of records for the throws squad? 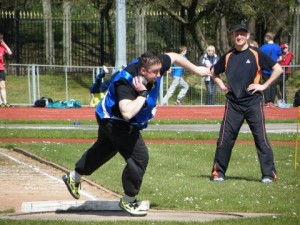 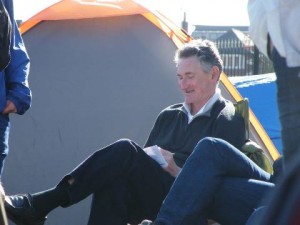 Our endurance coach enjoying the sunshine.

There was a slightly chilly
breeze but we managed to secure a sheltered pitch at the head of the
track where the athletes had a panoramic view over the stadium to watch
and support the day’s events.

First up was Alan Plumb who secured two
first places with Discus and Shot and came second in the Hammer Throw
with a magnificent PB of 38.53 – well done Alan.

Our runners had a
great day seeing lst place positions for Matthew Dutton in the 800m
U17, Darius Boardman in the 1500m U17 and Matthew Barnes in the 1500m
U15.

Also some fantastic running from Joe Lonsdale in the 100m and
200m, gaining 2 PBs, Luke Thompson having a very challenging finish
with Matthew Barnes in the 1500m to come 2nd  with Matthew Thompson
coming in 3rd in the 800m with Josh Ingham getting  a 3rd position in
the 1500m with a PB.

Kai Atkins in the U13’s had a fantastic run
coming in 2nd place with a PB.

On to our jumpers now.  Timmy Barnes
gave a fantastic performance in the High Jump U13 equally the Club U13
record of 1.40m.  Daemon came 2nd in the U15 Boys High Jump with a
staggering 1.55m giving him a PB.

In the Long Jump Natrika Wildman had
a great jump with 4.38m coming in 2nd place and Spencer Phelan came in
4th position with a jump of 3.72m.

Other runners during the day
included great performances from Jacob and Harvey Van Geffen, Jordan
Isherwood and Faye Holden.  Making his debut in the 3000m was Jake Vos
coming in 9th position – the very last event of the day – well done.

A
great start to the season for our athletes seeing Pendle finish in the
Division l Male League in 4th position and 5th position in the Division
2 Female.

Pendle Athletics always welcomes new competing athletes so
why not give it a go – it is a fun day out for all especially when the
sun is shining!