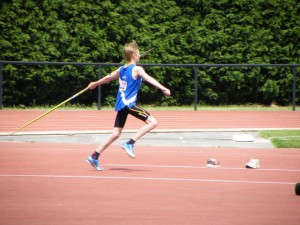 It was a fine sunny day and our athletes gave 100%
to their chosen event with seven of them gaining Personal Best times,
four gaining a County Standard and two gaining an English Standard –
with Leah once again gaining another Championship Best Performance with
her Javelin.

Neng Wildman (because he was a senior) was able to do two
events, the 100m and 200m. He got through to the final in both events
and finished 3rd in the 200m with a PB and an amazing lst in the 100m
equalling his PB and an English Standard hopefully now going through to
the English Schools Championships – brilliant running Neng.  Needless
to say Neng was shattered when he got home !!

Leah Hillman gave a
remarkable display of pure power with her Javelin despite being the
last event of the day.  She threw an incredible 34.52 m gaining another
PB further breaking her own Pendle Club Record and getting a
Championship Best Performance as well as qualifying for the English
Schools – well done Leah.

Daemon
Metcalfe again equalled his PB of 1.60 gaining a County Standard and
Joe Lonsdale who (being at the younger end of the U15 age group)
finished an amazing 3rd place with a time of 25.2 gaining a County
Standard – roll on next year !

Natrika Wildman did the Long Jump with
a jump of 4.60, Gregan Baker with the Javelin throwing 28.68 and Jordan
Isherwood running the 1500m with a personal best time of 4.54.0 all
gave credible performances on the day for Pendle Schools.

Newcomers to
Pendle Athletic Club who have only recently started training were
Meisha Watson in the 200m who got a PB of 2.46.4 and Jack Endersby who
finished 2nd in the Shot with a throw of 10.65 – well done to you both
and we look forward to seeing you compete further for the Club.

Well
done to all of you who took part at Wigan – you did your Club proud.

I
feel that I must also mention Luke Thompson – who took part in the
Yorkshire Schools Championships – he gave an incredible performance in
the 800m and qualified for English Schools – well done to you Luke too
!