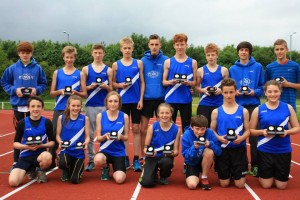 AWE-INSPIRING ! – The talent of our Pendle Athletes is limitless, but it is not all about their achievements it is also about the friendships that are created and the bonds that are built between their buddies, making pals along the way from other Clubs, as they support each other through the highs and lows of their training and competing.  As seen in all the photos posted by Richard, Leah and myself, the comradeship shines through !

This weekend was another fantastic experience with the amazing Pendle Athletes notching up 8 Gold Medals, 8 Silver Medals and 10 Bronze medals over the course of the weekend as well as  20 new PB’s and 2 new Pendle Club Records !

The weather was not very kind to us with the monsoon that descended upon us on Saturday but the Athletes carried on regardless battling on through the lashing rain and floods – they remained focused like true professionals.  Two o’clock it was forecast and amazingly enough two o’clock it came !

For those who stopped over in Blackpool, making the most of the weekend, their rooms resembled Chinese Laundries as radiators were crammed with wet shoes and clothes hung everywhere drying to do it all again on the Sunday !

Sunday’s weather looked a little more optimistic with the sunshine making an appearance from time to time which lifted the spirits of everyone.

Many thanks once again go to the Officials who are exposed to the elements as they endeavour to record the events, Sheila Markendale, Derek Butterworth, Karen Hillman, Daemon Metcalfe and the demon raker Alison Phelan. Thanks must also go to Faye Holden for her commitment and time spent seeding all the Athletes, without people like you events like this would struggle to take place.

Now to the spectacular heart of the matter – GOLD MEDALS and new LANCASHIRE CHAMPIONS from Pendle Athletic Club went to ALEX BAKER in the U13’s Hammer (PB), DAEMON METCALFE for the U17 Men’s Long Jump (PB), LEAH HILLMAN for the U17 Women’s Javelin, Shot Putt and Discus, MATTHEW BARNES for the U17 Men’s 3000m and JAMES BLACKBURN in the Senior Men’s Triple Jump (PB) and Senior Men’s Long Jump (PB). Not only did James get the Gold Medals but also broke the Pendle Club Record for Long Jump and bettered his previous Club record in the Triple Jump – fantastic jumping James.

Other outstanding performances came from the following athletes who all gained PB’s, RUBY SCHOFIELD in 70m Hurdles, KAI ATKINS in the 1500m, JOE LONSDALE in the Long Jump, TIARNAN CRORKEN in the 1500m and last but not least an Exceptional Performance Award to KAI ATKINS for his outstanding Acrobatics !

Athletes not previously mentioned who also gave fantastic performances on the day were MEISHA WATSON in the U17 Women’s 800m (1 second off her PB) well done Meisha (a little nervous at being her first time at these Championships), THOMAS MARCHANT who once again gave a strong reliable performance given the ‘Monsoon’, JOSH INGHAM who ran two great races over the weekend in the U20 Men’s 1500m and 800m and MATTHEW THOMPSON who ran a brave race in the U17 Men’s 800m but unfortunately did not finished due to a recurring injury – we wish you a speedy recovery Matthew.

To conclude, we can all agree that Pendle Athletic Club should feel proud as punch at the performances all our athletes gave.  It is a great weekend spectating, for children to aspire to, adults to admire and the elderly to reflect – not mentioning any names !!

So once again – give yourselves a slap on the back – you are all FAB !

There is still plenty of competing to be done for the rest of the season.  The next Northerns event is in Carlisle on 7th June (Coach), the next Mid Lancs is at Litherland on Saturday 28th June (Coach).