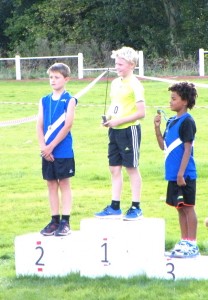 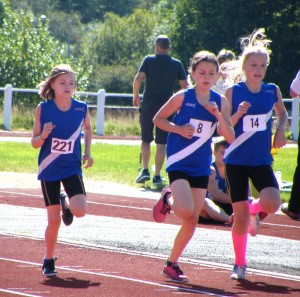 MAGNIFICENT ! –  A multitude of medals were bestowed upon our young Pendle athletes at our very own Pendle Open Athletic Meeting.  Proud of each and everyone of you who entered and competed for the Club, giving it your all.  The newcomers to athletic events, our little U11’s and U10’s were fantastic – the joy on their faces was brilliant to see, some slightly nervous but most encompassing the day and doing fantastically well at their chosen events.

A fabulous 59 members came and took part winning a grand total of 28 Gold Medals, 21 Silver Medals and 20 Bronze Medals so well done to each and everyone of you.

Superb effort to the littlies – you are our future.  Train hard, don’t be afraid to compete, enjoy yourselves  and aspire to be like the older athletes who continue to make Pendle Athletic Club the Club that it is today.

Too many achievements to mention each and everyone of you but outstanding performances came from Leah Hillman, 3 Golds in Hammer, Javelin and Shot setting 3 New Meeting Records, Alex Baker, 3 Golds in Hammer, Javelin and Shot , a new Meeting Record in Hammer, PB’s in Hammer and Javelin, her Javelin PB taking her to the top of the Power of 10 in the North West and 22nd in the UK.  Three Gold Medals for U10 Eathan French in the 800m, 75m and Long Jump – brilliant Eathan, two Gold Medals for Joe Lonsdale in the 100m and 200m breaking a Pendle Club Record for 200m, James Blackburn Senior Male with two Gold Medals and two New Meeting Records and Katy Lord with two Golds Medals in the 100m and 200m also two Gold Medals from Matthew Thompson in the U17 400m and 800m, great achievement Matthew as we know you have been battling injury all season – fantastic!

Our best wishes at the end of the season go to Matthew Dutton who is pursuing his new career – you have been an amazing athlete in the Club and we hope you come back to see us from time to time.

Good luck to Gregan Baker who is representing Lancashire in the Combined English Schools Finals in Boston Lincolnshire next weekend, doing Hurdles, Shot, Long Jump, High Jump and 800m – well done Gregan and go for it !

It has once again been a great athletic season, weather could have been kinder but Pendle Open must have had the best weather of the season – BECAUSE WE ARE WORTH IT !

Onwards and upwards to the Cross Country season – don’t be afraid to give it a go – great team spirit amongst our members.

Before I leave, I must say a big thank you to Seedhill Athletic Club and Ash for all his help in hosting the event, an even bigger THANK YOU to Christine, David and Paul for all their hard work in sorting out the entries and many THANKS to all the parents and officials from other Clubs who helped on the day to make this the memorable day that it was.

A full table of Pendle Athletic Club Medal Winners are below:-