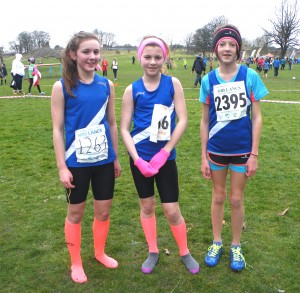 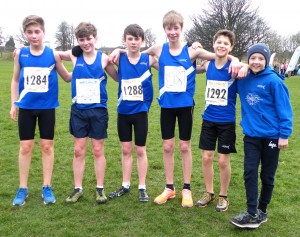 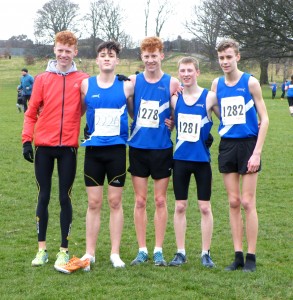 PHENOMENAL !  What a grand finish to our 2014/15 Cross Country season. While several of us battled it out at Lancaster our big guns were competing in Birmingham at the Intercounties Cross Country Championships.  Kai Atkins, Matty Barnes, James Marchant, Callum Ross and Josh Ingham all had amazing results in the enormously turned out races of champions. Results from Birmingham will be posted in a separate report.

Back to our own climax in the Mid Lancs.  At the start of the day, anticipation was rising as we were on the verge of clinching a few team titles.  Kai Atkins had already secured his well earned position of Gold Medallist in the U15 Boys having had a monumental cross country season for the Club.

Our first race of the day was the U11 Boys where we saw Jamie Ashworth and Matthew Maxfield attacking the course.  They both had fabulous runs  finishing in 34th and  43rd places respectively – well done boys, looking forward to seeing you both next year where we can hopefully find another team member for you.

Next to run were the U13 Girls, our psychedelic trio, with Isabel Hartley, making her debut,  to complete  a team for the girls.  Ella Atkins, although there in spirit, was away this week supporting her brother in Birmingham like nice sisters do !! Ruby Schofield, having had a frustrating year with a niggly injury, finished her season on a high, finishing in 14th place followed closely behind in 16th place by Isabel who had a brilliant run and hope she enjoyed it enough to continue next year and form a team with Bethany and Ella. Bethany Ashworth had a strong determined run coming in very closely behind in 19th place.  You have all been fantastic this season, getting more colourful as the season progressed.  Again I am looking forward to next season and to see what can be accomplished after a summer of training. The girls team finished in a brilliant 5th position out of 18 Clubs – superb !

Our star entry in the U13 Boys was Harry Nelson who put in a brave run, being cheered on by the rest of the Pendle supporters finishing is a credible 19th place.  It is Harry’s first season with us and he has turned out at all the Red Rose races and three of the Mid Lancs.  He may not get the results he wants but I am so pleased that he has embraced the season and enjoyed taking part in such a tough gruelling sport.  I look forward to Harry competing again next year where, hopefully, he and Harry Smith can be part of an U15 boys team. I am extremely proud of your enthusiasm this year Harry – well done.

Now to our U15 Boys, missing their linchpin, they positively worked together to try and clinch a well deserved Silver medal for the team and by golly they did it.

Well done to Gregan Baker, Tim Barnes, Harry Schofield, Jacob and Harvey Van Geffen.  Along with Kai they formed a tenacious team of hard workers,  taking a brilliant 2nd team place – outstanding work from all of you.  Tim put in a fabulous run today finishing in 9th place with Gregan in 14th, Harry in 16th with Jacob and Harvey in 17th and 18th places. You can smile now Harvey – the season has finished and you and Jacob did me proud.

Last but not least today, our raptor of racing, it was ‘The Predator’ who stole the show in the U17 Men.  Thomas Marchant had the most perfectly planned race, showing great maturity in his running, being hunted at his every move by Jordan McDonald from Clayton who sat on his shoulder like a vulture waiting to take his prey. He moved aside to let him take the lead then the roles were reversed, he was now the hunter waiting to make his kill.  Thomas seized the opportunity to storm home for an incredible victory with the icing on the cake being his Gold Medal position to win the league – absolutely brilliant work Thomas – you make everyone proud , a real Pendle legend !

Next to finish in the U17 Men was a stupendous performance from Tiarnan Crorken who put in a fantastic run to complete his season 3rd in the race and 9th place in the league – well done T.

Emerson James,  who was hot on the heels of Tiarnan, finished with an incredible sprint finish to clinch a 4th place in the race with Luke Thompson, another focused individual, also put in a great run to finish in 11th place.

The U 17 Men, with the help over the season from James Marchant, who finished  in 6th place in the league, Matty Barnes and Callum Ross, Matthew Thompson, went on to claim that well earned prize of Gold Medal Team place for the year – true champions to the core – fab.

I would also like to thank all, including our tiddlies who have run for the first time at Burnley, Eathan Trickett and Harry Smith who competed in the majority of races and our seniors, you know who you are !

Well, I am signing out now at the end of a truly brilliant season.  Hope to see you all next year.  Stay positive and train hard, as I was explaining to one of the newcomers yesterday, it is not all about the race, you are all part of a special Pendle team, we support each other through ups and downs, we have fun together after the race, we wear our team colours with pride but most of all it is the taking part that counts, hopefully, next year, we may be able to encourage a few more to join our Pendle team spirit.