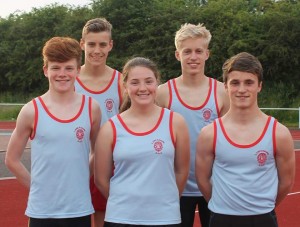 Firstly I want to congratulate our 6 competitors who represented Pendle A.C. with such aplomb, just to get selected is one hell of an achievement.

On the first day Tiarnan Crorken was in the 1500m heats and Emerson was in the 800m heats, neither got through, I think the champs came to soon as they were a month away from full fitness.

Joe Lonsdale then got through his heat, but went out in the semi’s, but he is bottom year, so I am sure he will be back next year.

On day 2 Leah, lovely Leah came sixth in the Javelin and pronounced herself pleased with her performance as she is also bottom year.

Matt Barnes was in the 3k, in a field of 23, which I think is ridiculous, but he had a good run. even though he was not pleased – he was a second off his p.b.

I have left Kai until last because his performance was out of this world, firstly winning his heat in a time that put him top of the national rankings, then in the final produced a run of speed, strength and sheer guts to become the ENGLISH SCHOOLS CHAMPION. It’s not often a youngster shows such maturity, he has it all. I would also like to thank Karen for supplying me with the tissues ! 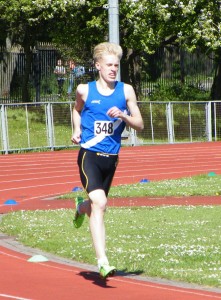 The awesome Kai Atkins in action

Just to let everyone know, Sheila Markendale is now out of hospital having ‘gone through the mill’ and is on her way to recovery. We, all at Pendle Athletic Club, wish her well and know she would have gladly traded her hospital bed to be with all her athletes at Gateshead, she was definitely there in spirit !