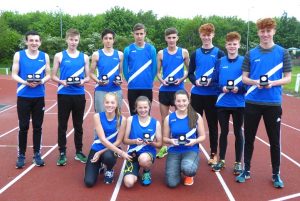 SPEECHLESS ! – Words can’t describe how blown away I am with the talent of the athletes from Pendle Athletic Club. For a small Club we have an amazing group of athletes who wowed us over the course of the weekend.

Once again the sun was shining all weekend – we had a few burnt faces and crispy earlobes but there was a nasty little nip in the air depending on which side of the track you were on !

The first day got off to a fantastic start with two gold medals for Gregan Baker and Daemon Metcalfe in the U17 Boys and U20 Men High Jump respectively.   We were treated to an awesome display of superbness from Daemon as he cleared an incredible 1.81m, not only claiming gold but getting himself a PB and Pendle Club Record – simply brilliant Daemon.

Daemon also went on to achieve a bronze medal in the Long Jump – great weekend for you D.

Spencer Phelan also excelled in the Javelin with a mammoth throw of 44.09 (where did that come from !)  His shamazing performance earned himself a silver medal and an 8m increase in his PB in Javelin. He also got a silver medal and PB in the Discus and also threw a superb 9.90m in the Shot – awesome throwing Spencer.

Sticking with our throwers, Leah Hillman once again showed us what a true Champ she is by throwing  PB  37.99 in the Javelin, English Schools qualifying distance, silver medal and a Pendle Club record – totally awe-inspiring. She also threw 33.98 for gold in the Discus, threw a PB in the Shot of 11.27 for gold and came in bronze medal position in the Hammer – staggering performance Leah.

Alex Baker, in the U15 age group, threw an overwhelming throw in the Javelin of 34.81 (English Schools qualifying distance for the age group above hers!)  Totally superb Alex – the look on your face of disbelief said it all – believe in yourself – you are a star ! This throw also gained her a PB, Championship Best Performance, gold medal and a Pendle Club Record.  She also threw 9.57 in the shot gaining her a bronze medal and PB, 4th in the Discus with a PB and 4th in the Hammer – great weekend’s work Al.

Natrika Wildman did some great jumping finishing in 5th place out of an extremely large field – well done Nat.

Now on to our runners – we missed Kai this weekend and wish him a speedy recovery.

Josh Ingham  ran a superb race in the 5k finishing in silver position with a PB of 16.06.0 – fantastic Josh.

Tiarnan Crorken managed an amazing double with a gold in the 800m and a gold in the 1500m – a stunning performance from you T at the weekend – well done.

Matthew and Luke Thompson both ran a very dependable race in the 800m – supporting the other Pendle runners magnificently finishing in 6th and 7th place – brilliant boys.

Joe Lonsdale – totally breathtaking – claimed a double gold with the 100m and 200m – you are a sight to be seen – English Schools qualifier in both with a PB of 11.0m in the 100m and Pendle Club Record – spine tingling stuff Joe !

Last but not least on the track – Ella Atkins putting in a remarkable display in the 200m and 300m gaining herself PB’s in both – fantastic Ella given you are the younger end of the U15’s  – keep up the good work.

Both found it incredibly competitive but Jamie managed to bag himself a PB in the U15 100m – superb Jamie and Morgan ran a fantastic race in the U15 1500m finishing a fabulous 8th place – well done boys.

To all who competed this weekend – I once again salute you !  To all of you who gave your time to help – I salute you also !  A big thank you to all that offered their willing assistance this weekend, Alison Phelan who took on a new role as pole vault official who was on and off that mat very nimbly and efficiently, David Hillman who confidently flagged the Javelin, Tim Lonsdale who helped throughout the weekend on various disciplines and Derek Butterworth who led our team of officials and of course Faye who was our track official – a massive thank you to each and everyone of you – without people like you the competitions would struggle to take place – we just need a few more willing an able volunteers to share the load !

A big thank you to your Coaches, Noel, David, Derek and Daemon – they must all be so proud of you all.

As I have said before, I am going to say it again – The talent of our Pendle Athletes is limitless, but it is not all about their achievements it is also about the friendships that are created and the bonds that are built between their buddies, making pals along the way from other Clubs, as they support each other through the highs and lows of their training and competing.  As seen in all the photos, their comradeship shines through !

The next event is the Mid Lancs at Hyndburn on Saturday, 28th May – see you all there.