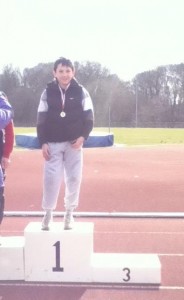 It was
a very poor turnout in this category as there were only two
competitors.  Spencer’s first event was 100 m and he got a time of
14.6, his season best at present.  His second event was the Vortex
Howler.  This was a new event for Spencer but he threw an amazing
41.07!  His third event was the Long Jump where he jumped a season best
of 4.25 and then to his final event, the one where he was least
confident -the 800m!   Spencer was leading overall going into this
event but came second in this race as the other athlete was about 30
seconds in front of him.

As the final points were calibrated Spencer
came out on top with the Gold Award with ten points ahead of the other
athlete.