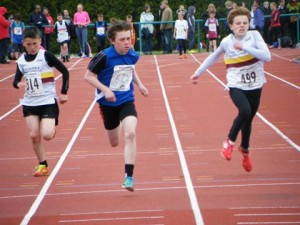 Not the best of days to take part in athletics – the weather was dull, dreary and damp
and cold but our Pendle athletes put 100% into their events given the
atrocious conditions.  It was an exceptionally long day for some, with
the male Javelin cut short due to the time, but we saw 6 PB’s and a
Pendle Club Record broken.

The day started with Alan Plumb and Zac
Child throwing the Shot and Hammer in a slippy wet circle followed by
Alan throwing the Discus.  Alan gained two first positions and a second
with Zac getting a third place in the Hammer both gaining valuable
points for the Club.

Kai Atkins also had a great run at 800m gaining himself a PB.

Other outstanding performances came from Matthew Thompson and Thomas Marchant, our 1500m
boys, finishing strongly in first and third positions both gaining PB’s
– Noel must be very proud of you all.

Daemon Metcalfe, Natrika Wildman and Timmy Barnes did some great high jumping gaining a first position
and two second positions respectively well done to all three of you.

Newcomers to the Mid Lancs League were Adele Ogden, Sam Taylor-Bolshaw
and Michael Taubman.  Not the best day to make your debuts but you all
competed well and we hope the weather hasn’t put you off competing
again !  Sam was his heat winner of the U15 100m and Adele got third
position in the U17 Women’s 800m gaining 7 points for the ladies – well
done Adele.

Athlete of the day has to go to Leah Hillman who came
first in the Discus and Javelin and second in the Shot Putt but more
importantly got a PB in her Discus with a whopping throw of 31.27
breaking the existing Pendle Club Record of 29.86. Brilliant throwing
Leah, it is a shame your climbing skills are not as good !

Let us hope that the Great British Summertime has returned by the next Mid Lancs Meeting at
Lancaster on the 15th June !