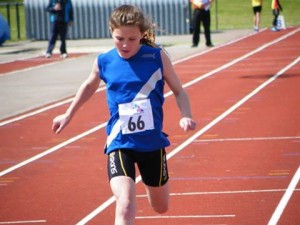 Another
glorious day for athletics with our little band of athletes who
ventured to Litherland for the second YDL meeting.  It was a touch
windy but spectators enjoyed watching the day’s events unfold from a
little sheltered cluster of brightly coloured tents and chairs on a
bank overlooking the impressive athletics arena.

Again, our athletes
gave some incredible performances racking up an impressive 24 personal
best times, excellent to say there were only 18 Pendle athletes taking
part.
Luke Thompson, Thomas Marchant, Kate Pritchard, Jamie Oldcorn,
Spencer Phelan, Sammy Taylor Bolshaw and Matthew Barnes all gained 2 PB’s, while Ruby Schofield, a newcomer to the YDL League gained 3 PB’s,
well done Ruby. Other notable performances came from Gregan Baker
winning the 4k Hammer Throw which he did for the first time at that
weight, a PB for Kai in the Long Jump, an amazing jump and PB for
Natrika in the Long Jump of 4.89 and PB,s from the Barnes Bros for
their performances in the Hurdles !

Also making an appearance for the
first time in the YDL league was Saul Wilds and Alex Baker who gave
tremendous performances for the first time in this league.  Alex got
herself a PB with a great Javelin throw of 14.66m and an encouraging
throw in the Shot Putt as well as a confident Long Jump and Saul did
the 100m, 200m and Javelin throw – where he finished in 2nd place in
the B Group, as well as doing the relay for the first time.  Having a
try at different events enables the Club to gain valuable points and
several of our athletes gained their PB’s from doing just that so don’t
be afraid to give things a try.

Well done to the relay teams as we
managed to again field three teams with the U15 Boys 4 x 300m cruising
their way to victory.

Performance of the day must go to Spencer Phelan
who got a PB in his Long Jump finishing in lst position and also
managed to break a Pendle Club record with a magnificent Javelin throw
of 30.92 – a great performance which earned him a well deserved ice-
cream at the end of the day !

Thanks to all the Track Officials of the
day from Pendle Athletic Club, we were adequately covered so no
penalties, as far as I know, were imposed !

At the end of the day
Pendle Athletic Club finished in 2nd position with 476 points, 84
points behind Dash Athletic Club and 42 points in front of the 3rd
position Colwyn Bay Athletic Club.  Our points for Fixture 2 were 39
points improved from the Stockport fixture and one can see the athletes
going from strength to strength.

Report by Lynn Baker
(Again please let me know of any
errors – my mistakes are not intentional !)