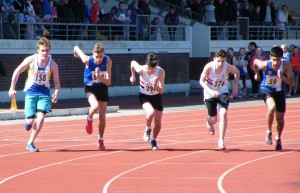 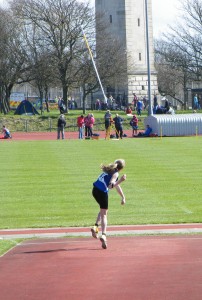 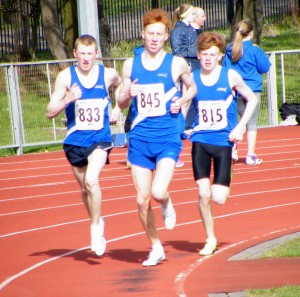 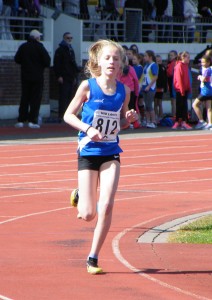 STUNNING ! – and that was just our new Pendle Gazebo, erected in all its glory along with our new Pendle Feather !  Just an awning heater and sofa requested now by Mr T !  Thank you to all those who helped in putting it up and taking it down – it is a job which needs to be shared throughout the season please.

Nineteen Pendle athletes made the journey to Blackpool for the first of the Mid Lancs T & F events to enjoy the sunshine and buzzing atmosphere to get the season off to a flying start.

At least it was fine and sunny but the frisky breeze reminded us that it still was in fact only April !

Lovely to see Karen Hillman, who came to support everyone (and make use of available spare tops, gloves blankets) as she endeavoured to keep warm !

A special thank you to our newcomer Andy Higginbottom whose daughter Kaitlin made a box of delicious biscuits to be shared amongst our athletes. They were enjoyed by everyone and obviously contributed to the success of the day – thank you Kaitlin.

Noel’s gang – fresh from Portugal – gave us some impressive displays of awesomeness !

Our two male throwers kicked off the day with the Hammer.  Alan Plumb and Andy Higginbottom, making his debut for Pendle, put in some fab throws finishing 2nd and 4th respectively.  Through the day they went on to compete in the Shot finishing 2nd and 6th then Andy completed his day with the Javelin finishing 4th – not a bad days work Andy for your first day competing with Pendle – well done.

Kai Atkins got the runners off to an amazing start in the 800m, cruising his way round to a 9 second win on the 2nd place runner. Kai has grown once again and matured into the strong true professional that he is – awesome Kai. He

also nailed it in the 400m storming in home in first place with a PB too – top man !

Tim Barnes also started the season with the 800m and finished in 9th place with a brilliant PB – great running Tim – your Portuguese training has also paid off – fantastic.  Tim also went on to compete in the U15 Boys High Jump.  Having had a winter of no training due to no indoor training facilities, unlike some other local clubs, he managed to equal his PB from last year so looking good for this season Tim – brill.

Leeroy Golding, our very seasoned runner, managed to sneak in without me seeing him – acquired his number and the first I saw of him he was there, ready, on the track waiting to give it his all.  He put in a great run finishing  6th in the 200m and 12th in the 400m – a strong performer – he then went on to compete in the Discus finishing in 4th place – superb Leeroy.

James Marchant is our final Senior Man of the day – can’t believe he has reached this level so quick – he seems to have been competing forever.  James showed great maturity for his age and put in an incredible run in the 1500m earning himself a magnificent 2nd place – amazing running James.

Next we have Emerson James, making his debut for Pendle on the Track today, who came and embraced the 400m, also fresh from Portugal, finishing in a superb 4th place for the U17 Men – well done Emerson.

Tiarnan Crorken, who is running with great strength at the moment, stormed round the track in the 800m for the U17 Men finishing impressively in 1st place earning himself a great PB – immense effort T – well done.

Now on to our posse of U17 1500m runners, all tuned to the highest degree from their week in the sun.  Matthew Barnes, Luke Thompson and Thomas Marchant commanded the track running as a team, finishing in 1, 2, 3 with a very impressive lead from their peers – awesome running – your intense training really showed you all to be true professionals. Noel should be really proud of all his runners today.

Our sole sprint runner of the day was Joe Lonsdale who had a phenomenal run in the 100m finishing with a time of 11.4, 1st place and a PB, definitely on track for bigger things this year – great running Joe who is now a younger runner in the U17 Men.  Pulling out all the stops also in the 200m, another PB with a time of 24.0, who finished in an amazing 2nd place, superb Joe.

Noel’s young ladies also put in some great running today where we saw Ruby Schofield, still recovering from her niggly injury but getting there.  Ruby put in a great run in the 800m finishing in 9th and also 20th in the four heats of 200m.  Ruby is unfortunately a younger end athlete this year competing against older girls – looking forward to watching Ruby mature over the season ready for her attack next year in the U15 Girls.

My athlete of the day is Ella Atkins who is in her second year of U13 Girls and showed great promise for a fab year.  She started the day with a fabulous run in the 800m, supported all the way by Pendle Athletes and her brother Kai ! She finished in 6th place – great running Ella. The best result of the day for me was seeing Ella motor home in the 200m in first place – she has grown over the year into a committed runner in Noels group and every inch deserved her victory today – well done Ella.

Daemon Metcalfe, despite his wardrobe malfunction, put in a great performance in the High Jump with a fab 1.60m jump – well done Daemon, a great start to the season. He also managed to put in a great run in the 400m – superb effort Daemon.

Now on to the Throwing group, great performances once again from all the throwers.  Leah Hillman, as usual, had some brilliant throws finishing first in the Shot, Discus and Javelin, she never ceases to amaze me with her commitment to her throwing – a credit to Pendle Athletic Club.

Gregan Baker, just having entered the U17 Men, did very well finishing 6th in the Shot with a credible throw for his size, 4th out of 7 in the Discus with a great throw and 5th out of 9 in the Javelin with a fab throw following his injury from last year.

Spencer did amazing finishing 2nd in Shot, 2nd in Discus with a PB and 1st in Javelin with a fantastic throw of 36.10 which was also a PB – well done Spencer.

Finally Alex Baker, who has now entered the younger end of the U15’s, did exceptionally well too, finishing 3rd in the Shot with a throw of 8.35, 1st in the Discus with a throw of 19.83 and 1st in the Javelin with a great throw of 26.54 giving her a new PB – great throwing Alex to say you have only just made up 13 !

I think I have covered everyone now, all that remains is to thank our team of officials, Faye Holden who very capably sorted the runners out on their starts, Sheila Markendale who very efficiently led the Javelin, Alison Phelan, measurer extraordinaire, and our three henchmen, Tim Lonsdale, Daemon Metcalfe (champion retrievers) and David Hillman who is a whizz with his flags – thank you to all of you.

Saturday ran like a dream for me and it always helps to have some great parent supporters.

Next Mid Lancs is Saturday, 9th May at Litherland where we hope to have a coach.

For the younger athletes (U15 and below) there are some Trafford Medal Meetings on Sunday 26th April, Monday 4th May and Monday 25th May.  If you want to give these younger meetings a try do it earlier rather than later just in case you find you enjoy the day – there is only one further event in August.

I am down at the track along with Christine if anyone has any questions.