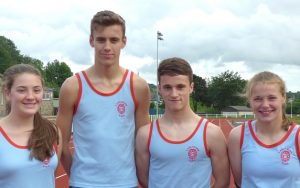 Four outstanding Pendle Athletic Club Athletes have been selected to represent Lancashire at the English Schools’ Athletic Championships in Gateshead next week. The ESAA National Championships are the 4th largest athletics event in the world, staged each year.

Firstly Tiarnan Crorken, for the Senior Boys, reached the qualifying standard of 3.58 in the 1500m gaining himself a well-deserved place in the Lancashire squad.

Pendle Athletic Club is a relatively small Club compared to other Clubs in the Lancashire area but there is a huge amount of talent at the Club. Good luck to all the above athletes next weekend – Friday/Saturday 8th/9th July at the English Schools Athletics Championships